My mom used to keep this seasoning, made by Spice Islands, on hand.  I used to put it on everything. It is a versatile mixture of spices that can be used to perk up the flavor of beef, pork, poultry, seafood, vegetables, soups, salads and eggs. Beau Monde is often used with homemade dips, salad dressings and sauces.

This recipe is found on many different sites online. 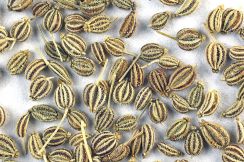 ajwain (AHJ-a-wahn) seed – the fruit pod / seed of a plant in the parsley family, they look like small caraway seeds, but taste like a pungent version of thyme 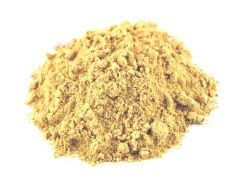 Asafoetida (ah-sah-FEH-teh-dah) powder – the dried gum oleoresin from the underground rhizome of several species of Ferula, which is a perennial herb; very strong onion-garlic flavor; taste is bitter and acrid, but odor and flavor become much milder and more pleasant upon heating in oil; powder is asafoetida mixed with rice flour and gum arabic

AKA asafetida / food of the gods / heeng / imguva

Despite its unpleasant aroma, asafoetida is considered both a digestive aid and antiflatulent. 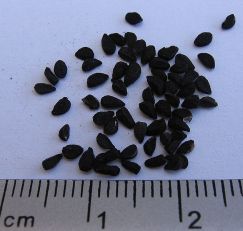 Traditional medicinal uses of black seed are extensive, including the treatment of skin conditions, respiratory infections, intestinal disorders and parasites, headaches, toothaches and more. Nigella helps promote lactation in nursing mothers and uterine contractions during labor, works as an insect repellent and is known to have anti-inflammatory, antibacterial and antioxidant properties. Studies suggest it also inhibits cancer cell progression and boosts the immune system.

The seeds have a slightly bitter and peppery quality with a mild oregano-like flavor. They should be lightly toasted before using whole, crushed or ground.

adapted by Marissa Davis Hefner
from Bill Echols on Allrecipes.com

adapted by Marissa Davis Hefner from Erin Parker on Allrecipes.com

Marissa tripled all of the ingredients, except the cinnamon and left out the bay leaf from Erin’s recipe. I decreased the amount of salt.

Flatbread & tzatziki are available at many grocery & specialty stores.
My favorites are at Trader Joe’s.

I am making vanilla bean paste today. Contrary to the name, it is not actually a paste, but a thick syrup holding hundreds of vanilla seeds in suspension. It combines the best of both vanilla bean and extract.  It’s like vanilla extract in its strength and how it is used but has the added visual benefit of the black seeds associated with a vanilla bean.

I found easy to follow written and video instructions on Master Pastry Chef. Since I wanted to make enough for me and both of my daughters, I decided to double the recipe.

I found a great deal on 1 pound of Madagascar Bourbon Planifolia Extract Grade B Vanilla Beans.

If you are like me, you might not know that “Bourbon” is not something that is added, but rather a particular type of vanilla beans.

I also needed four 15-16 ounce bottles since my double recipe would make about 2 liters of delicious goo. After looking at dozens of varieties, I decided on some beautiful 17 oz bottles that came in a set of 6 for less than purchasing 4 separate bottles.

After the vanilla beans and bottles arrived, I got started (okay, it was a few weeks later). First I had to cut open and scrape the seeds from one pound of vanilla beans. Do you know how many beans that is?? Neither did I until I started. Since they are dryer, Grade B vanilla beans are a little smaller than Grade A, so there are more of them to the pound – about 140 to 160! Fortunately my younger daughter was able to help. We ended up with almost a cup of vanilla seeds! 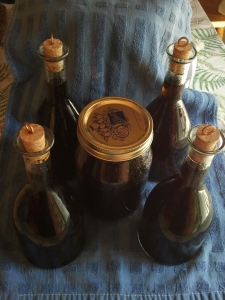 Juice of half a lime (this is not for flavor, the acidity stops crystallization)

Save beans for next batch, using 1/2 the amount of new beans + the old beans.

He says that due to the nature of the paste it does not need to be refrigerated, but I am keeping mine in the fridge since I am a little paranoid about keeping a homemade sugar concoction in the cabinet.

The Master Chef says 1 liter of this syrup last him for about a year – I think I’ve got enough for several years!

I considered spending a little more to get larger Grade A beans if I did this again, but then I found out on VanillaReview.com that for the purposes of making vanilla extract, Grade B beans are preferable. “Why?”, you may ask. “Isn’t Grade A / gourmet always better?” These are the reasons they gave why this is not true: